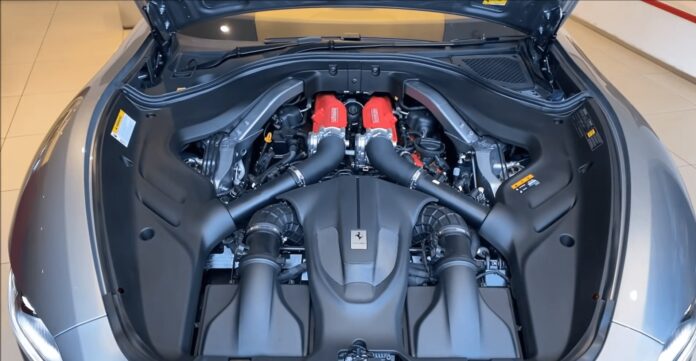 Sports cars of legendary brands have always attracted attention, and like wine, the older, the more expensive and better. The Ferrari company was founded in 1947 and produced legendary cars to this day. One of the latest innovations from the company is the Ferrari Roma. The sports car was officially unveiled on November 13, 2019. The basis for the new two-door coupe was the Ferrari Portofino coupe-convertible. 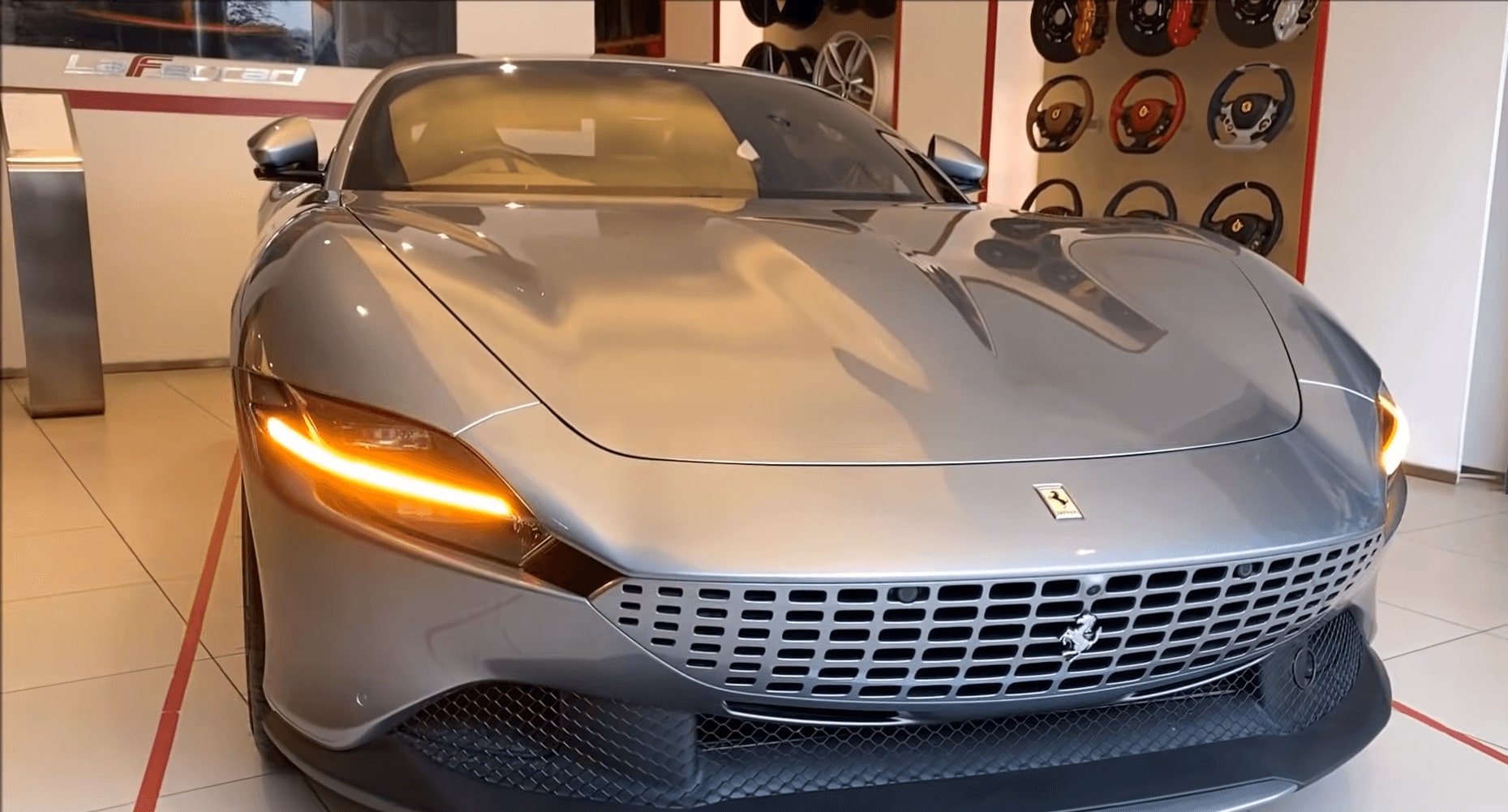 The appearance of the new Ferrari Roma is really a work of art. The car is significantly different from the previously known models of the company, both externally and characteristics. The front of the Ferrari Roma turned out to be elongated and, as motorists say, resembles the head of a snake. This opinion is emphasized by the front optics, with pronounced horizontal LED daytime running lights in the center. 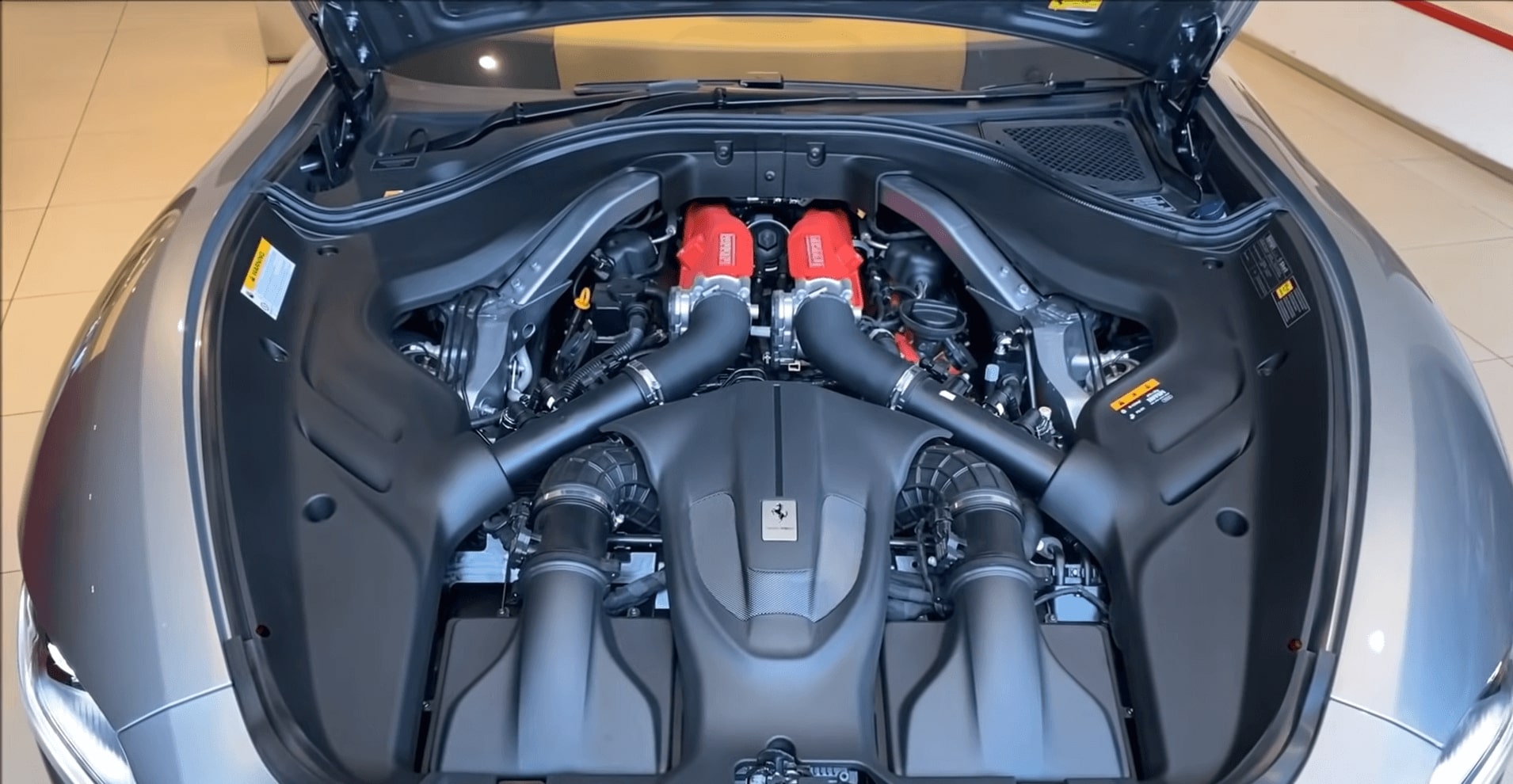 The engine is huge and is in the front-center position. It is a 3.9 Biturbo V8 with 620 hp and 77.4 km of torque. The drive is rear-wheel drive, and the dual-clutch gearbox has 8 gears — the same as the Ferrari SF90 Stradale, that hybrid model with a thousand horsepower. 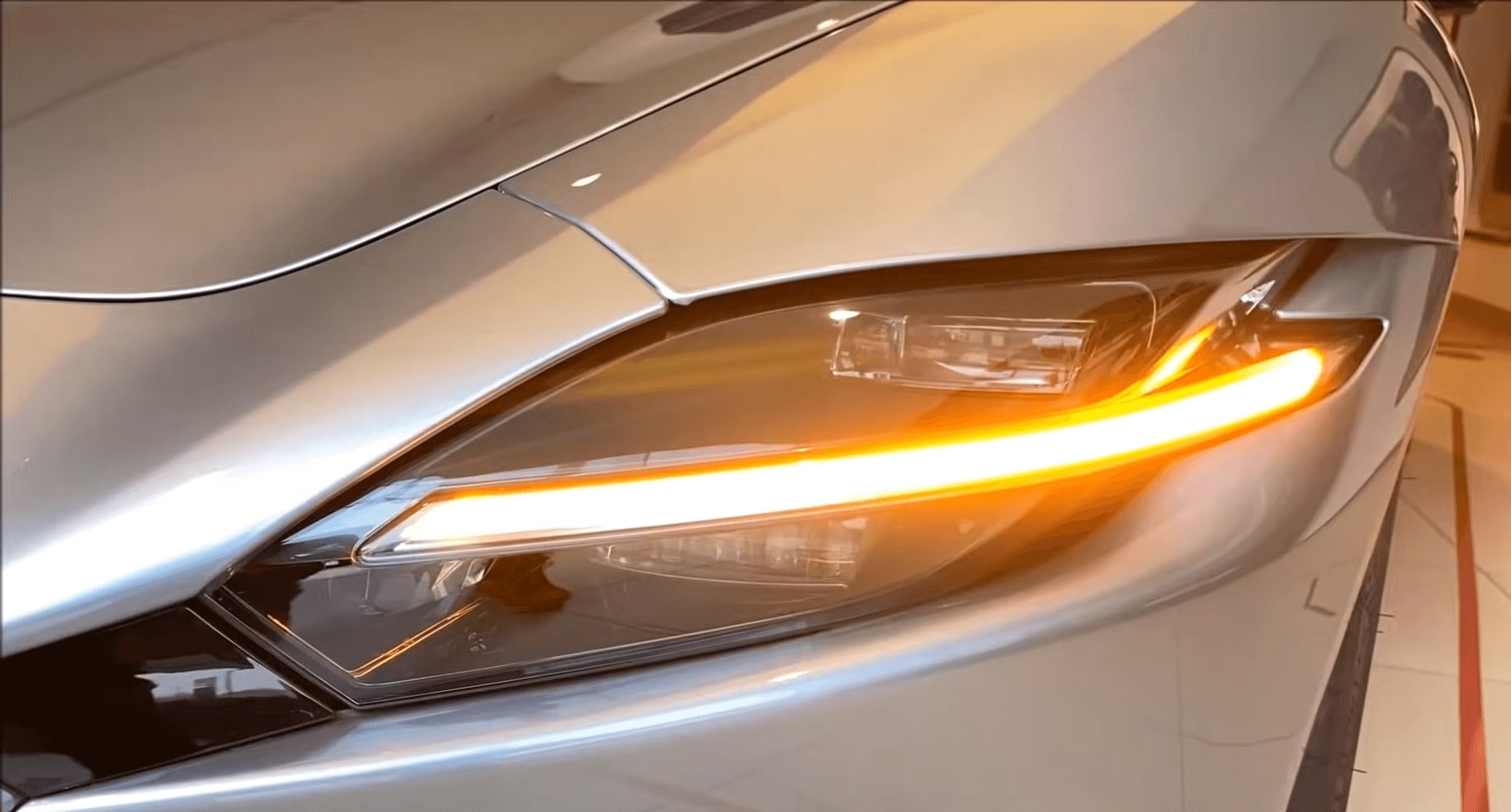 The LED headlamps are cut by a horizontal strip and pay homage to the Monza SP Ferraris. The lanterns create a continuous virtual line with the trunk lid; the rear bumper is black and has four exhaust outlets. 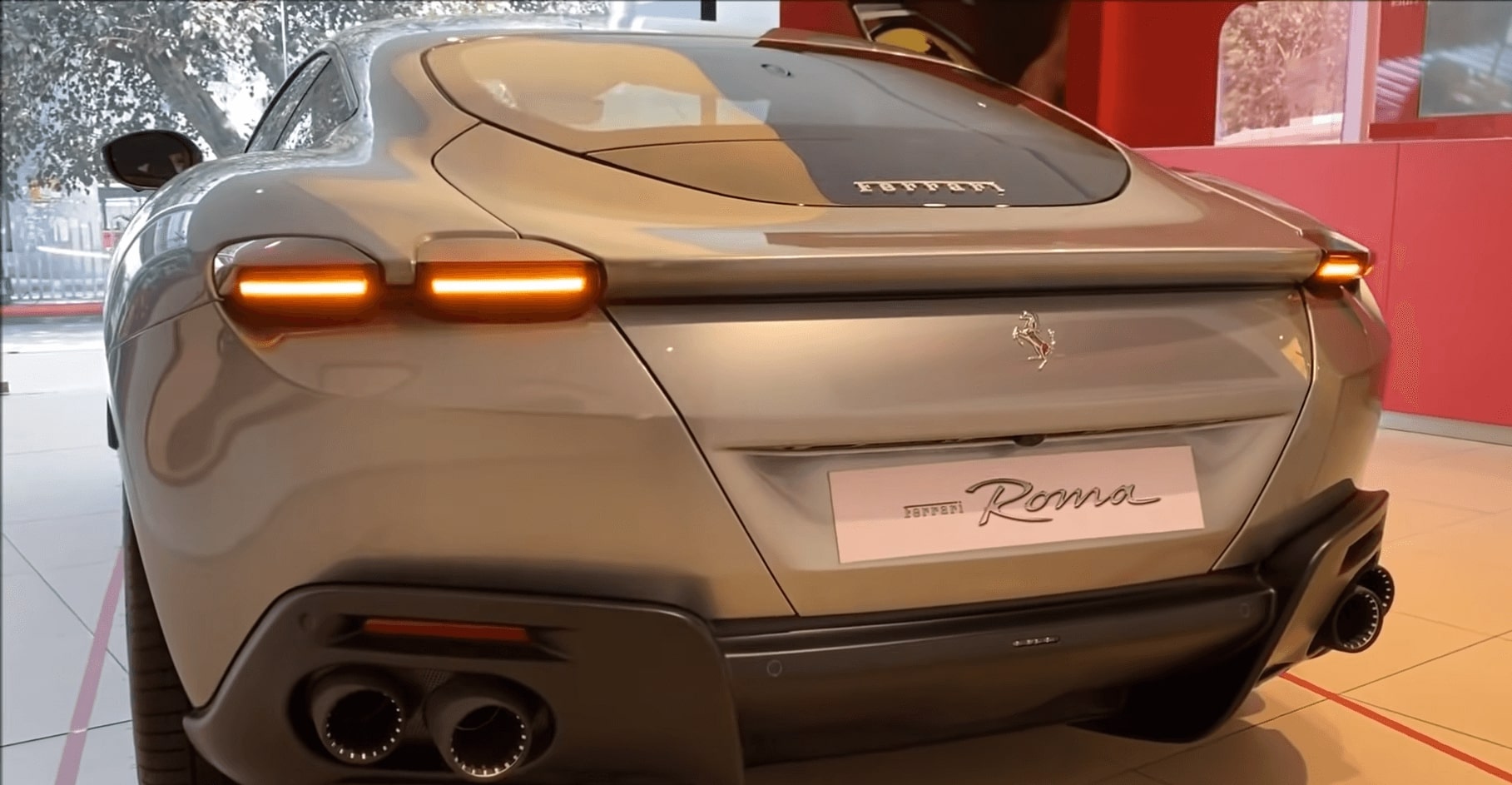 A spoiler is attached to the glass and improves aerodynamics at high speeds. It adjusts according to the speed and driving mode selected by the driver. Ferrari Roma generates 95 kg more downforce at 250 km/h than Portofino, for example. At the rear, a surprise: the trunk is not small as expected; it’s 270 liters: Hatch volume, but enough for bespoke bags.

From the images, the Roma looks smaller, but the truth is that the super sports car is 4.65 meters long, 1.97 m wide, 1.30 m high, and 2.67 m wheelbase. And it’s also light: it’s just 1,472 kg, normal average car weight. Like all Ferraris, the tires wear 20-rim wheels and receive diamond paint as an option. The Roma has a built-in handle, and you have to press a button located on the doors to get out of the car. 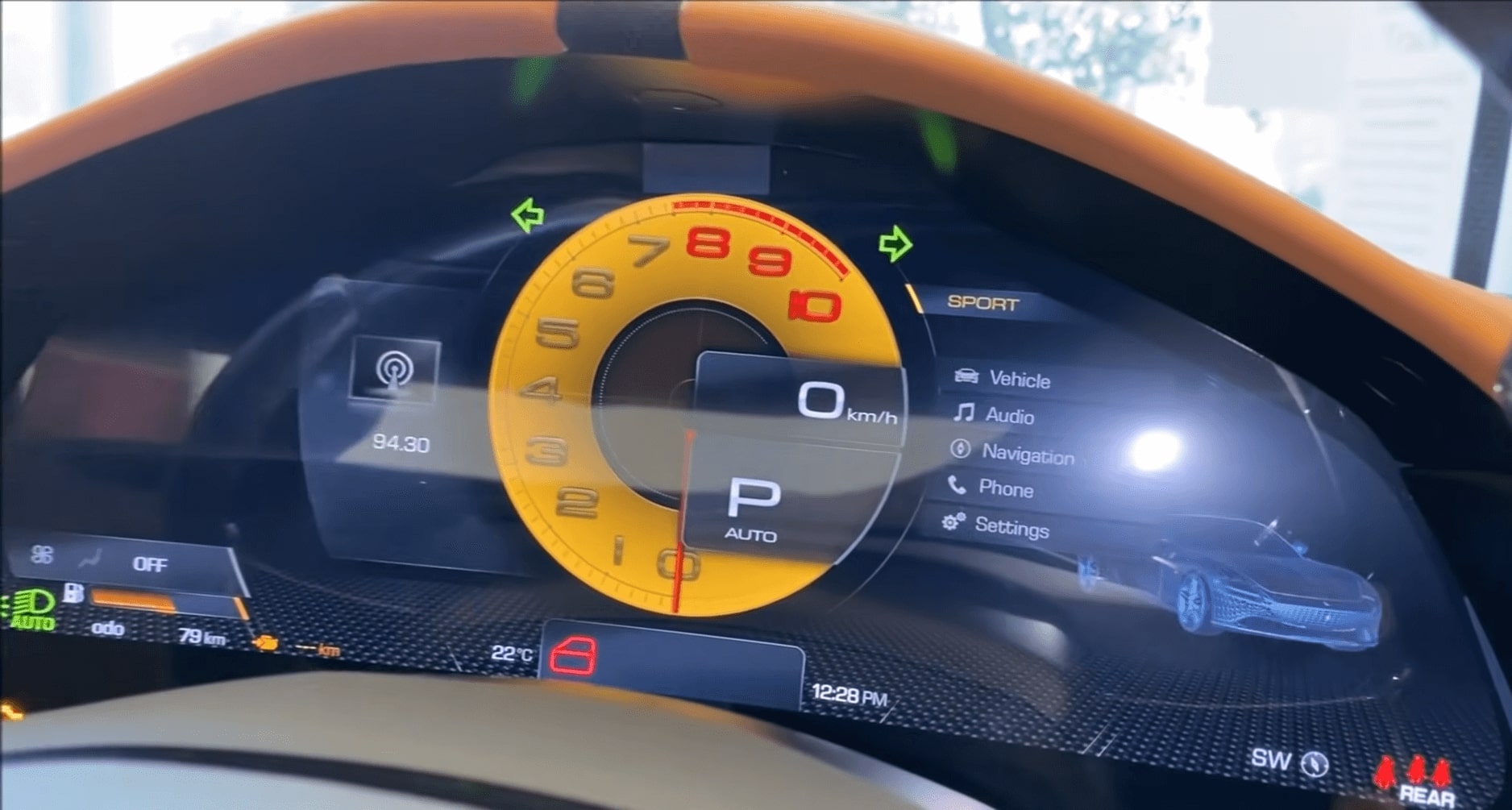 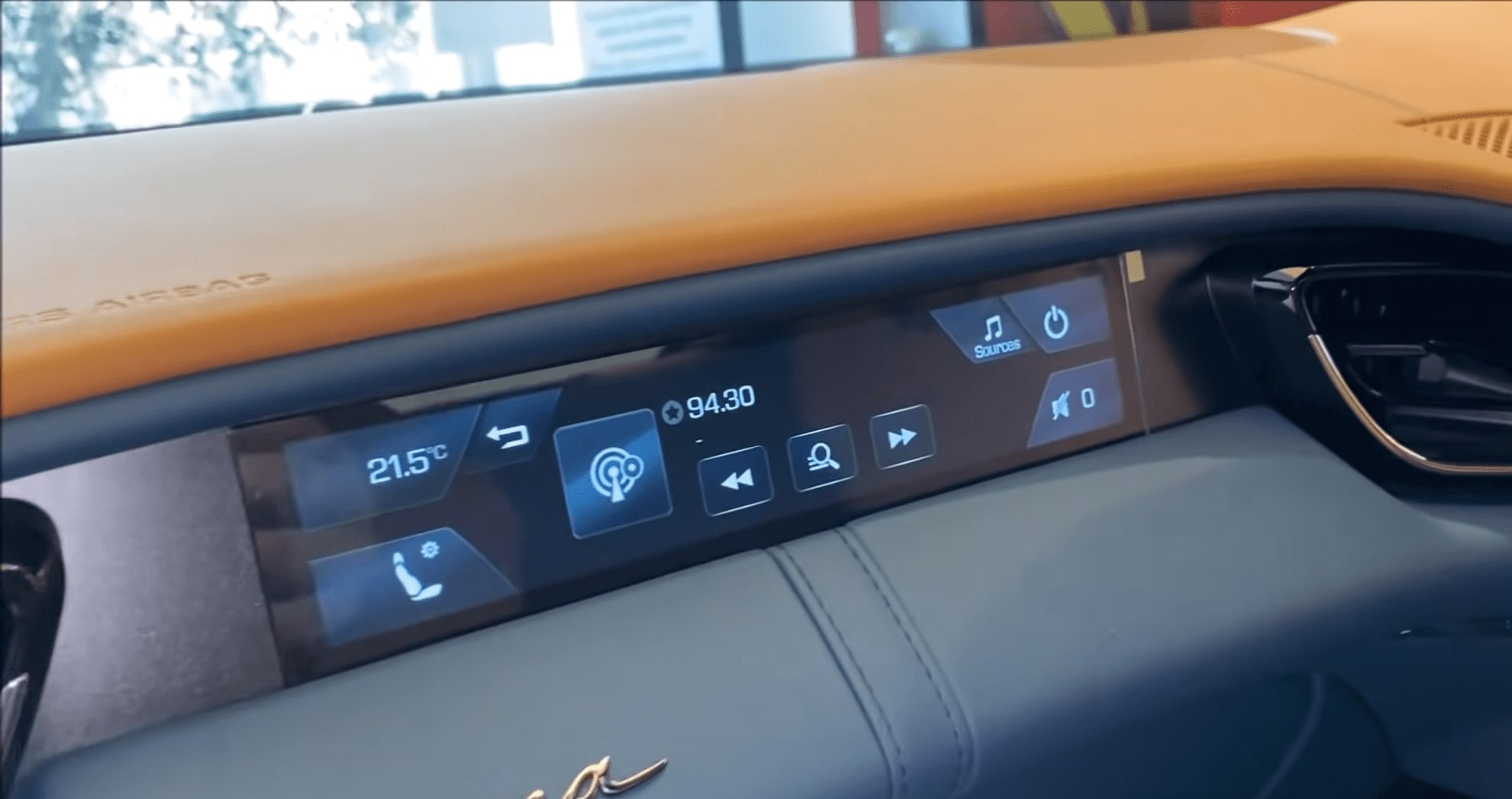 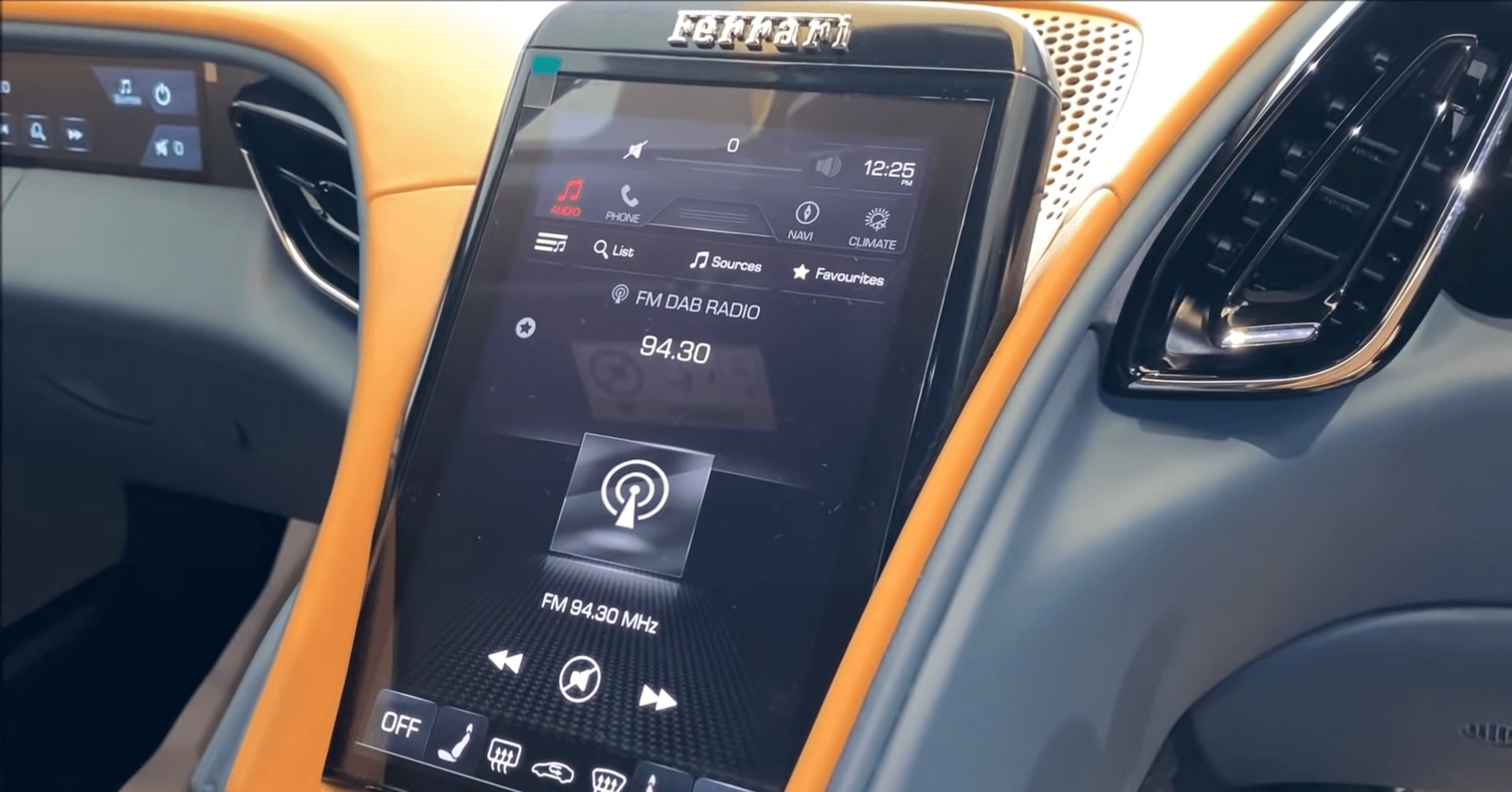 Inside, what is impressive is the technology. The instrument panel is digital, configurable, and has 10.5 inches, the same as the SF90. As tradition dictates, the tachometer is in the center, where it is still possible to see audio, navigation, and telephone information. The 8.4-inch vertical screen is unprecedented, and its position allows the driver and passenger to use the multimedia center. 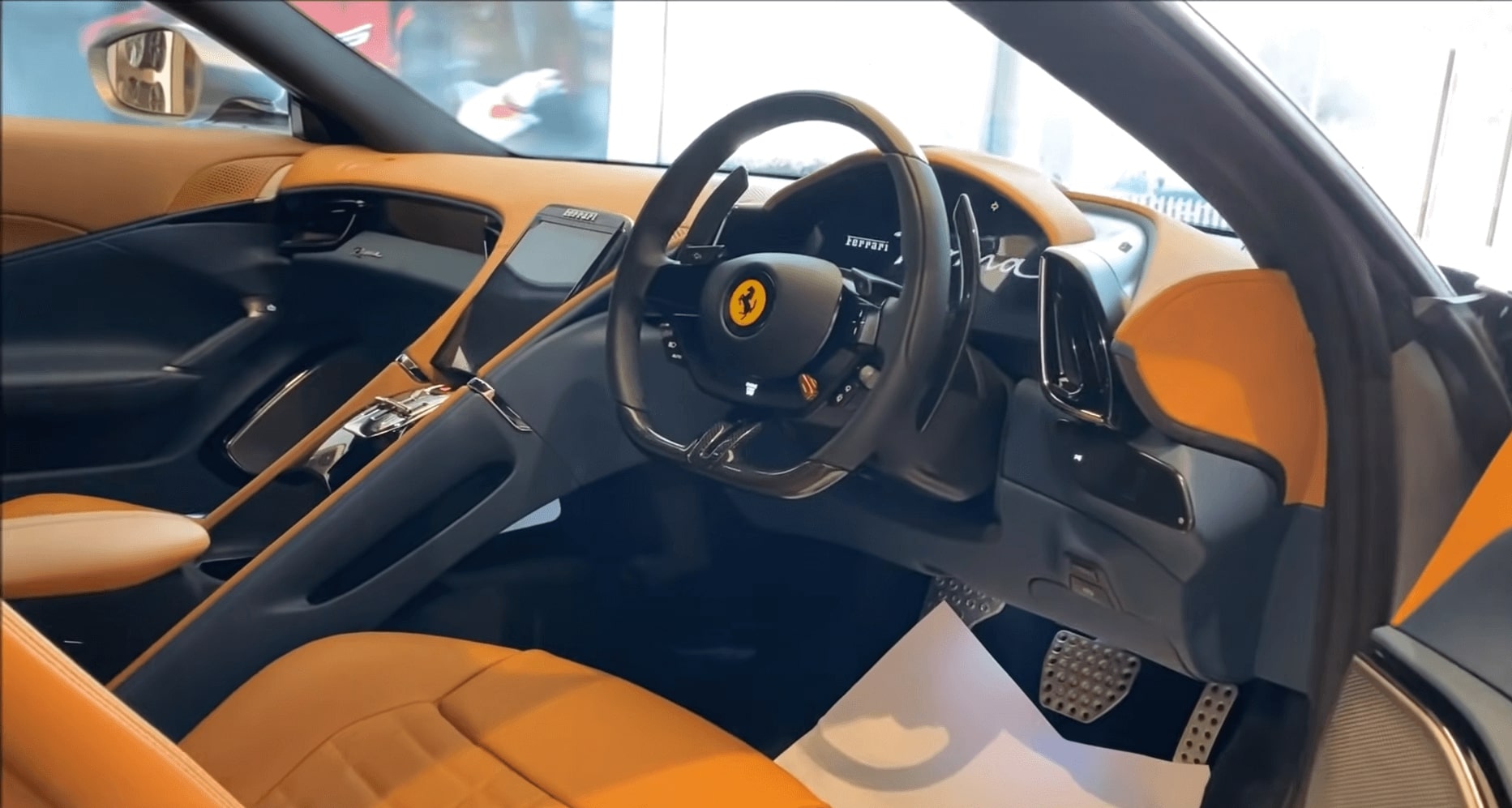 The multifunctional steering wheel is covered in two types of leather and has a flat base. So that the driver doesn’t have to take his hands off him, the brand has developed a series of controls so that almost everything can be done with just one touch. There is a kind of touchpad on the right through which you can navigate the cluster’s screens. The driver can choose between Wet (for the wet road), Comfort, Sport, Race, and ESC-Off, which turns off the traction and stability controls. 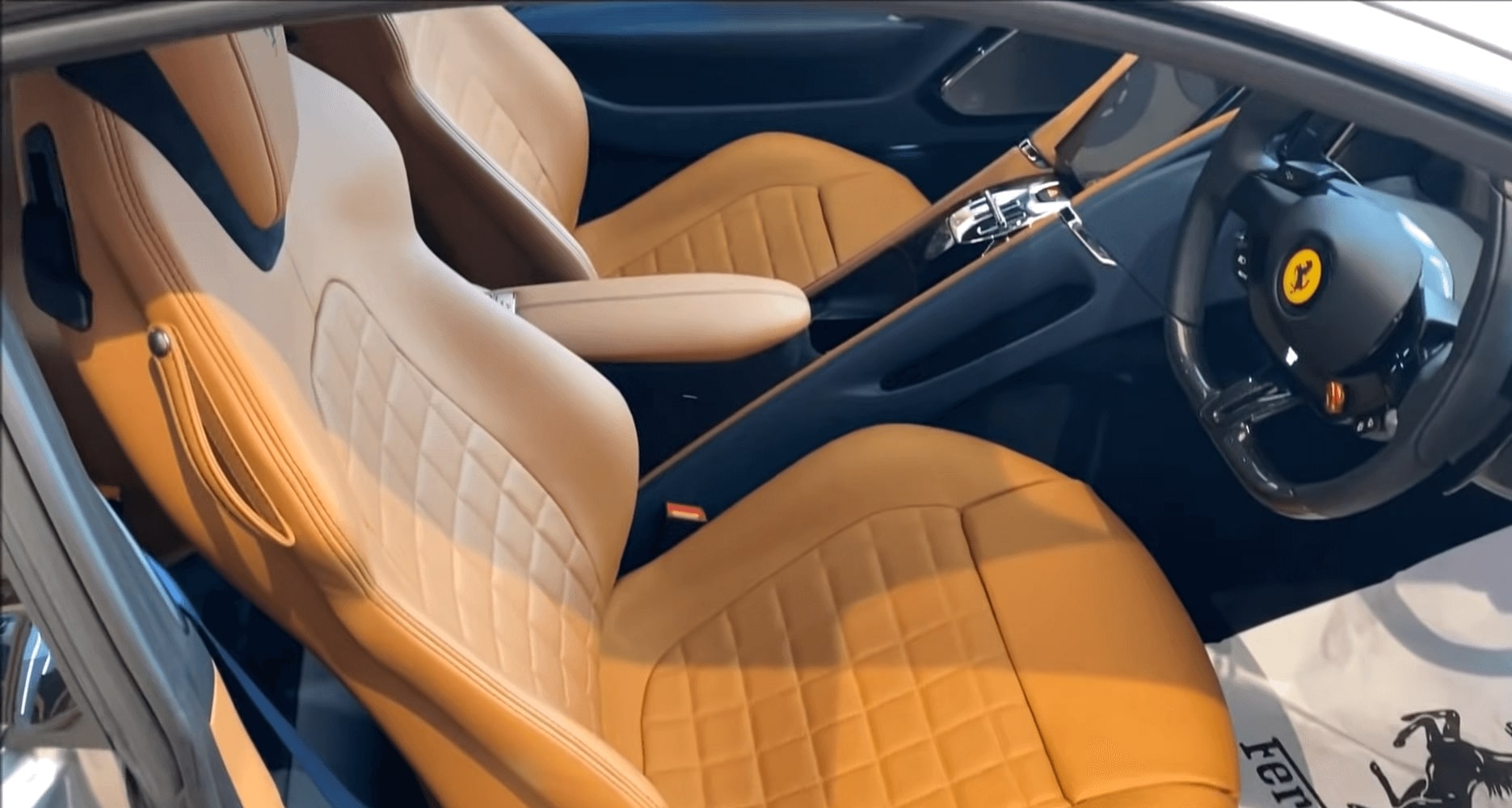 Unlike other brand models, Roma does not have the interior developed only with a focus on the driver. There are two well-separated spaces in the cabin, with nearly symmetrical structures. In other words, the passenger also feels involved in the driving experience. Aside from the cabin structure, what helps provide this feeling is an item sold as an option: a touchscreen located in front of the passenger with a speedometer selected driving mode, tachometer, cabin temperature, among other information. 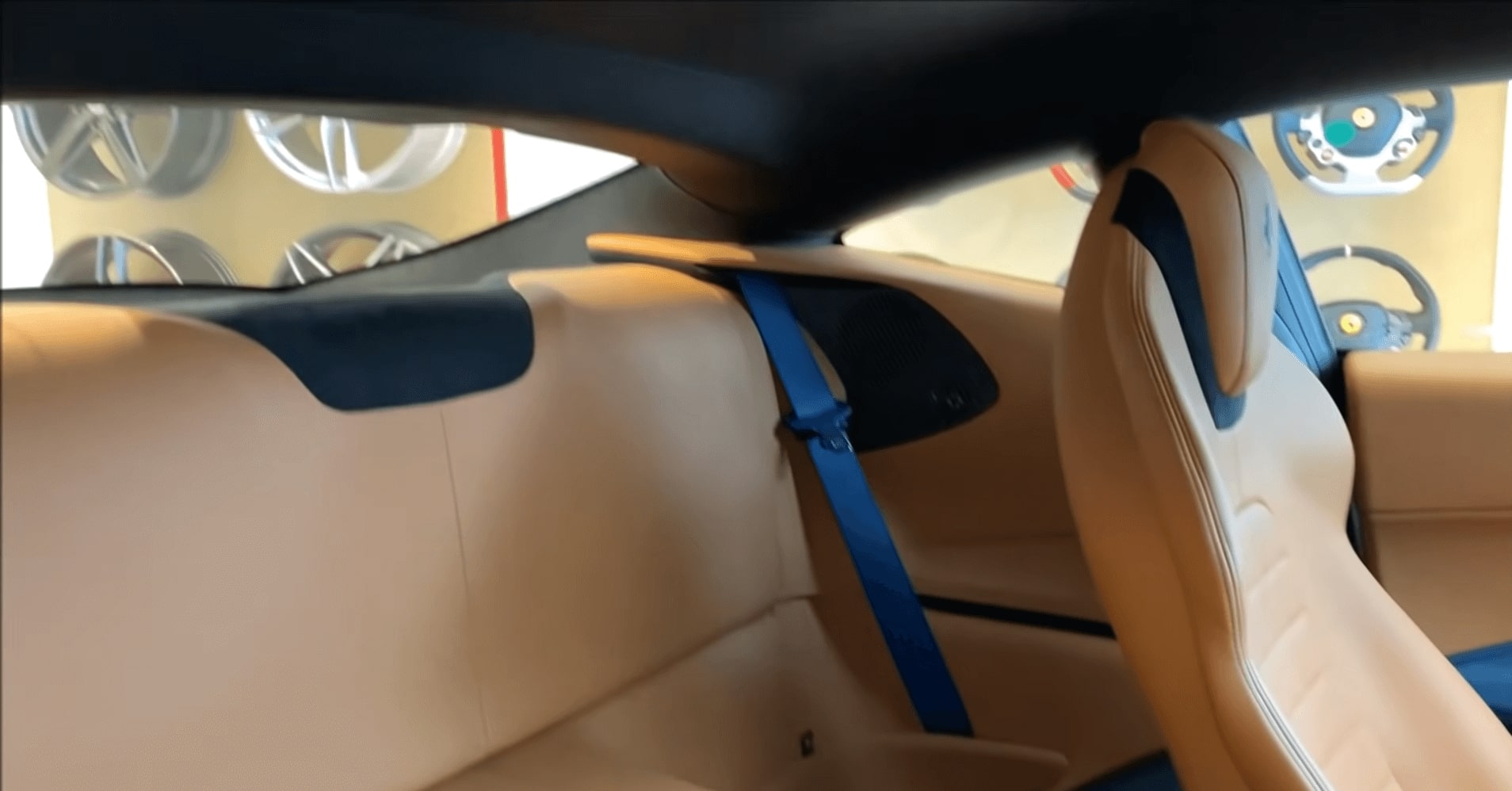 In addition to the technological aspect, the interior has noble materials, such as leather, Alcantara, aluminum, and carbon fiber, but the key could be more sophisticated. It’s too simple for a Ferrari and generated a lot of controversy at launch. It has only two buttons: one for opening the trunk and one for closing the doors.

Another fact that may disappoint: if you intend to take your friends for a walk, know that the super sports car even has rear seats, but they are made just for children. There is no room for adults. 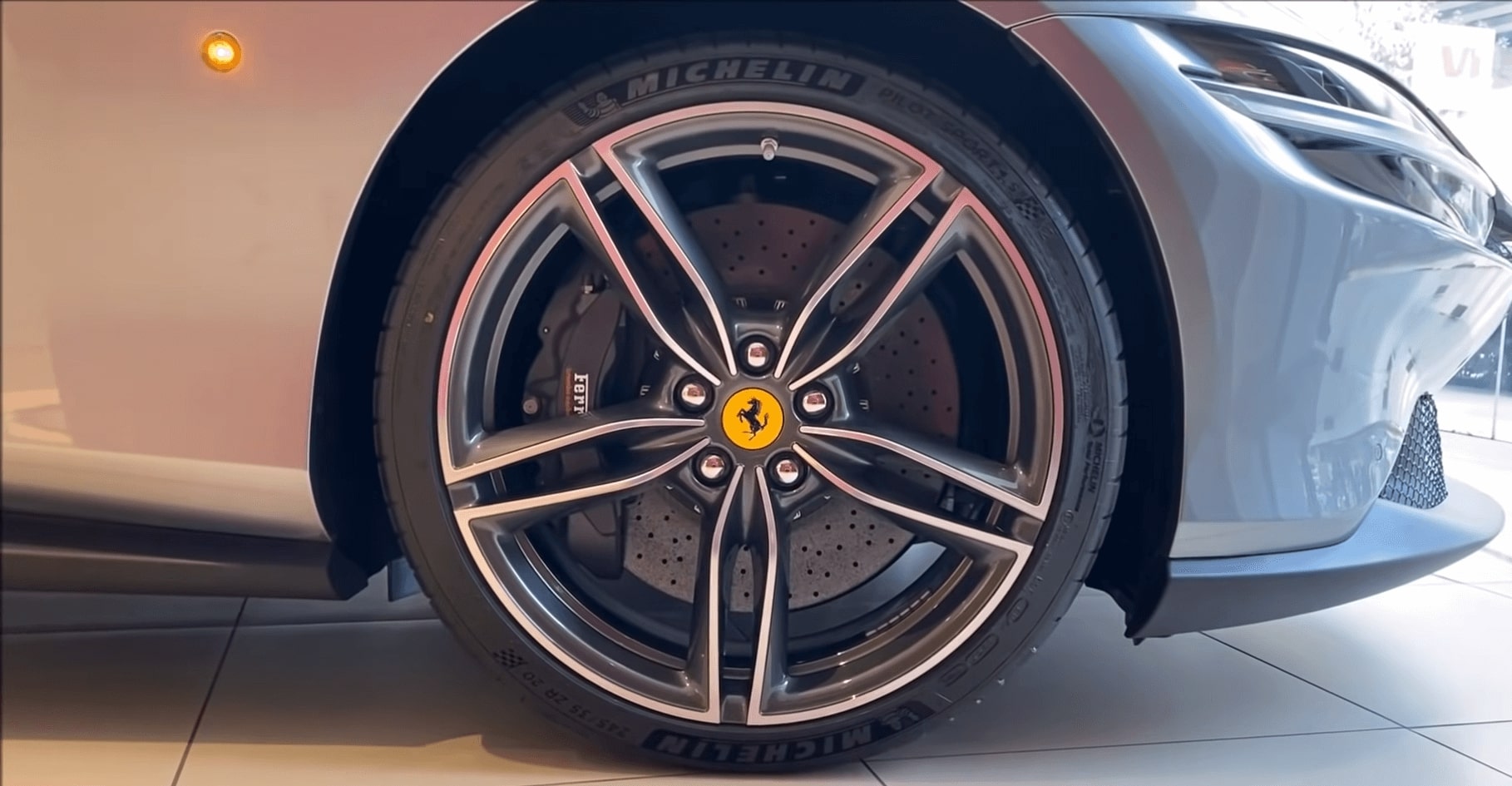 The time has finally come to take the wheel of Roma. To hear the powerful roar of the V8, press another button that (also) is on the steering wheel. When start/stop is engaged, the motor roars as loudly as expected. The unremarkable noise made everyone in the dealership look at the car.

By tradition, every Ferrari engine has its own “private soundtrack.” Roma’s entire exhaust geometry was redesigned thanks to the elimination of the two rear silencers, which improved the sound quality. Remember that Roma has the same V8 as the 488 and the F8. 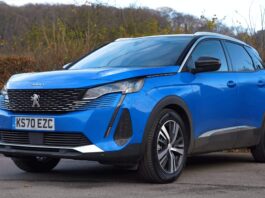 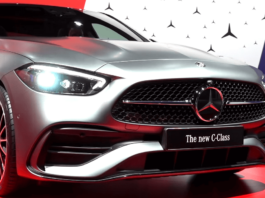 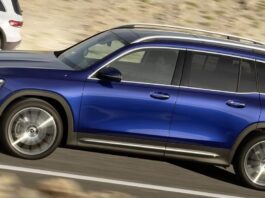 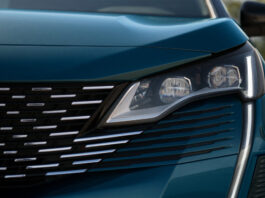 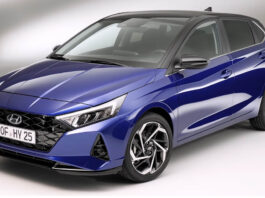 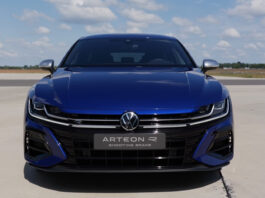